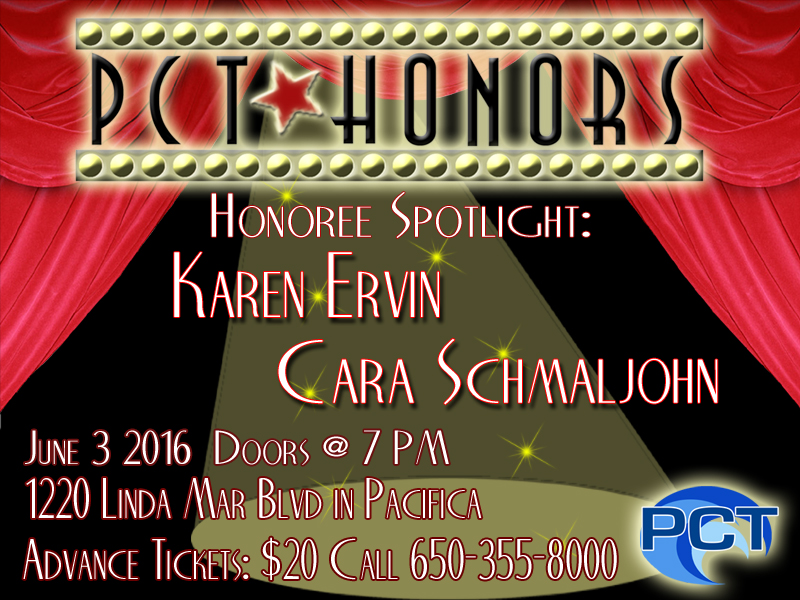 The quintessential public servant - a good listener to both sides of an argument, kind and compassionate – Karen Ervin served one term on the Pacifica School District board and is now serving one term on City Council. It’s her last term. As a school board member she served on the Strategic Planning Committee and a committee that addresses issues shared by the school districts and city government. She volunteered at two schools – Cabrillo and Ingrid B. Lacy Middle School - and held officer positions on their PTO boards, as well.

She was a member of the city’s Financing City Services Task Force from 2008- 2012. She is a board member for Pacifica School Volunteers and Pacificans Care and a member of AAUW.

As a City Council member, she belonged to the Legislative and Bicycle and Pedestrian Advisory Committee, served as a liaison to the Beautification Committee, the Economic Development Committee, the Library Liaison Committee and the Pacifica Resource Center.

On the county level, she is a General Assembly delegate for the City and County Association of Governments. She served as an alternate to the county’s Domestic Violence Council. She is currently representing Pacifica with Councilmember Mike O'Neill on the Jobs/Housing Gap Task Force organized and run by the County of San Mateo Supervisors.

The focus of her work on City Council the last four years has been getting Pacifica to a fiscally sustainable condition. She was also deeply concerned with Pacifica’s quality of life and the welfare of the citizens. Ervin said affordability concerns and environmental concerns are issues most effectively addressed if the community works together.

Ervin worked as a senior research associate for many years at Stanford University and Genentech and today is a project manager in Research at Genentech.

She is married to Mike Ervin and they have two children.

Cara Schmaljohn has been a strong voice and friendly face of care for senior citizens on the Half Moon Bay Coastside for nearly three decades. Her organization, Senior Coastsiders, began as a small volunteer effort working to meet needs of the elder population of the community. At first, the number of people involved, the facilities needed, and the services provided were quite small. Over its years, the Senior Coastsiders program gained support and strength by consistently delivering a growing list of services. On the Coastside, the organized efforts for senior citizens started in the 1970s. Senior Coastsiders became a recognized name in 1977, working as part of a group of several social services. In 1988, Schmaljohn joined Senior Coastsiders as its executive director. It incorporated as a separate non-profit in 1990. Since then, it has continued to grow. The most conspicuous of all its changes occurred recently, when construction was finished on its new facilities space. Now they have a banquet hall, numerous activities rooms and administrative space. Its new space is at the south end of Main Street, Half Moon Bay.

The larger area brings flexibility and the ability to collaborate in a host of ways with other parts of the elder care programs on the Coastside. As well, Senior Coastsiders can share space for special events with other organizations and non-profits.

Of the services to elders, the most visible is their meals program Last year, it provided 18,000 low cost meals for seniors and disabled adults. They also collaborate with other groups in their facility for another 15,000 plus meals per year, plus they provide transportation to and from the meals, and coordinate Meals on Wheels. They offer a host of classes, special presentations, and music, exercise and more. All these to sustain the body while providing all-important social touches. Now, the Senior Coastsiders facilitate home repairs for local, underserved elders. 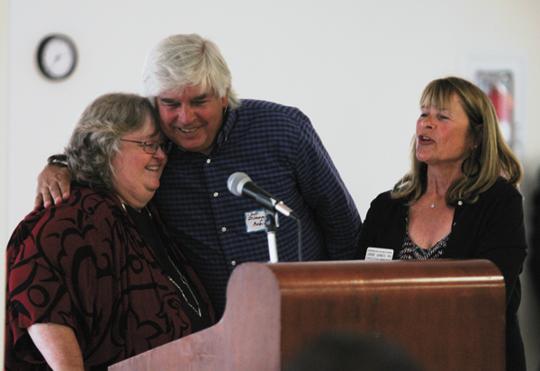 Schmaljohn came to the Coastside from her hometown in Colorado by way of Alaska. In Colorado she grew up close to an elder care home. There, she feels she first engrained her empathy for the aging generation. She and her sisters experienced the needs and benefits of helping. Her path to Senior Coastsiders included multiple educational degrees, a period of time supervising felons as a probation officer in Alaska, all aimed at eventual goal of eventual service within the non-profit world.

Schmaljohn is usually found in the company of her dogs – in the office, and on the trails and bluffs overlooking the natural wonder of the Coastside. She is celebrated for being at the hub of services, volunteers, elders, and other community service groups. But she feels her most important personal role is to be sure the community knows where to find guidance when aging difficulties begin to arise.